A Family Summit of Mount Langley 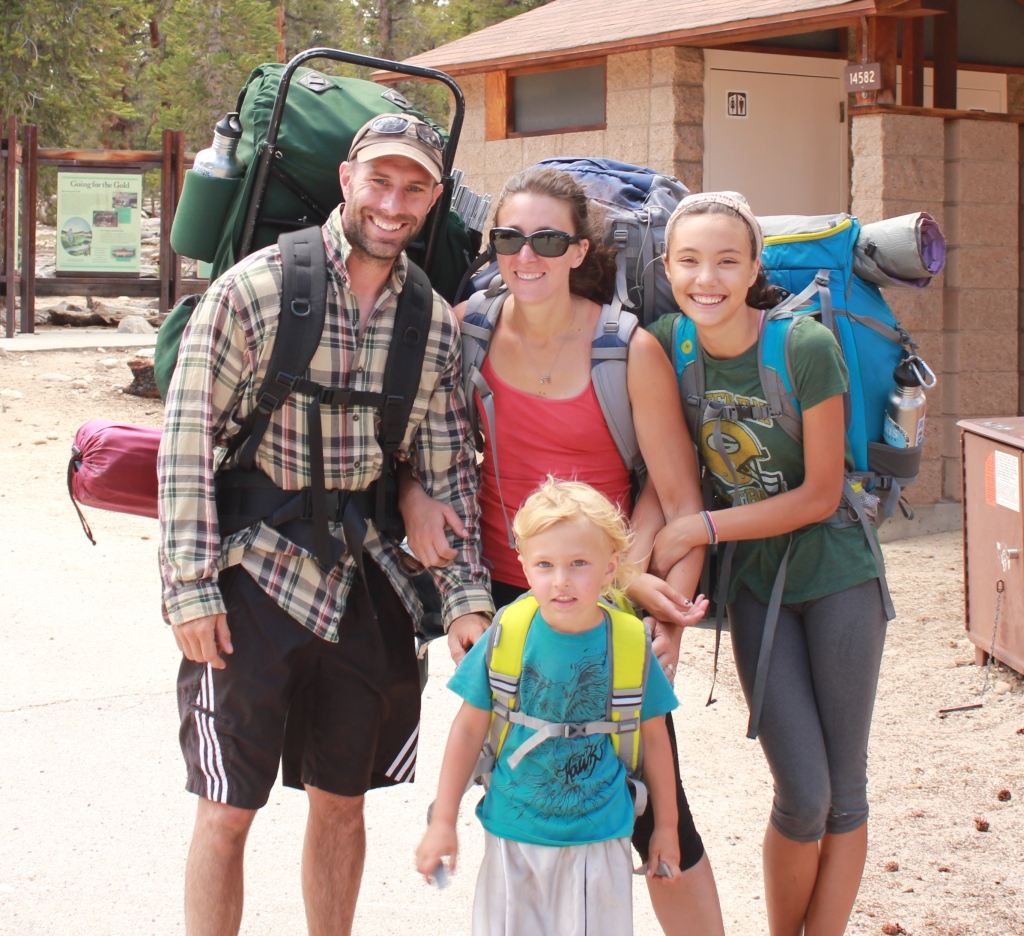 This past July our family took an extended road trip to California. Hitting the road is nothing new to our family, as we try to take at least a couple of short trips each year. Although it is often not the focus of our adventures, we try to involve some sort of rock climbing or mountaineering in the mix and this year we wanted to try something special; summiting a mountain. Never lacking for ambition we wanted to go big. There are only 65 mountains over 14,000 feet in the contiguous United States and the tallest of these is Mount Whitney in California. Although I have some mountaineering experience and my wife, Melissa and our 13 year old daughter Audrey, are both avid rock climbers, the unknown factor in this equation was our 4 year old son, Sawyer. I know everyone thinks their 4 year old is particularly energetic, but Sawyer definitely has a gift/curse of being indefatigable. Secretly, part of our desire to climb a mountain was to see if we could finally exhaust him!  For training, we took him to Devil’s Lake and climbed the talus fields and rock outcroppings along the bluffs. I think this was very useful for mountaineering as it acclimated him to heights and familiarized him with the scampering and climbing that were necessary near a mountain summit. 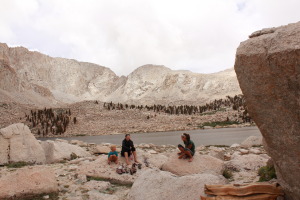 Sawyer, Melissa and Audrey at camp

We arrived in California only to learn that we were not going to be issued a permit for Mount Whitney. To prevent overcrowding, the forest service only issues a limited number of permits per day (everyone wants to climb the highest peak) and the lottery is very competitive. Not to be deterred, we took a permit to climb Mount Langley, Whitney’s neighbor.  Mount Langley sits at 14,042 feet, which is a few hundred feet less than Whitney, but is far less crowded and is considered by many to be more scenic with a more challenging summit. The hike is 22 miles round trip and gains several thousand feet of elevation. We started our ascent early in the morning in mid-July and reached our base camp at tree line, about 8 miles in near 1:00 pm. Our camp was a beautiful isthmus located between crystal clear mountain lakes beneath the old army pass, which still held visible snow fields. We know from reading of other mountaineers’ ascents that the peak was only an additional 3 miles from our camp. We were all feeling pretty fresh and psyched to get to the summit, so after a family vote we elected to push on. Now in hind sight, this could have been considered a bad idea. Mountain storms more often than not come in the afternoon and they can be extremely dangerous because of lightning strikes, precipitation and changes in temperature. Additionally, that last 3 miles was a whole lot more than we bargained for.

For those unfamiliar with mountaineering, climbing a fourteen thousand foot mountain can offer a real challenge. I knew a young marathon runner who completed her first fourteener in Colorado with a similar approach to Langley. After the ascent she shared that it was the hardest physical test of her life, much harder than a marathon!  At fourteen thousand feet, those not acclimated to altitude (like a family from Wisconsin), often experience light-headedness, dizziness and exhaustion. Not to mention an average mountain approach requires an entire day of hiking at a good clip with a heavy backpack.  Shortly after 3:00 pm we started our ascent up the old army pass.  From a distance, the trail up the pass is not discernable and the steep walls look unclimbable without a rope.  However, once we reached the foot of the pass, switchbacks manifested themselves that crisscrossed the loose scree, talus and snowfields that characterized the steep pass.  We had to do some scrambling in this section and negotiate a steep snow field near the peak that might have required the use of crampons a week or two earlier. The ascent up the pass was difficult and we were a bit apprehensive of what faced us beyond as there is no official trail to the summit. 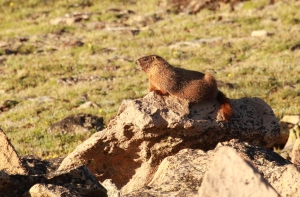 To distract us from this uncertainty we were greeted with a singular beauty of high alpine country that was harsh and barren, yet still teemed with life. We were constantly in the company of alpine flowers, marmots, picas and even big horn sheep. As the hours continued to tick away, we were all experiencing the fatigue but the glory of the summit kept pushing us forward. As we approached the summit the climbing got more difficult and we were greeted by class 2 and 3 climbing through a very large section of talus and scree. At this point our familiarity with rock climbing was crucial, as although this area was not overly challenging technically, it was invaluable to be comfortable and efficient moving upwards, especially when nearing exhaustion.

When we reached what we assumed to be the final push up the talus (we still couldn’t see the peak), the inevitable happened and Sawyer started to crash!  I chose to fall behind with him and told Melissa and Audrey to make a push to the top. They were both in great shape and I could see the desire to bag this peak in their eyes. Sawyer slowed considerably and started complaining about having to hike. We kept moving, albeit slowly, and I kept him entertained by trying to find the cairns that marked the makeshift trail up the boulder field (a cairn is a stack of small rocks to mark trails that climbers leave for others to follow). Then things got ugly. Sawyer started to cry and a few seconds later he briefly lost consciousness and collapsed. I picked him up off the ground and held him tight, letting him know how proud I was of him. Melissa and Audrey were out of sight by this time, but I figured Sawyer and I were officially out and we would wait for them to descend. We found a comfy seat on a rock and took in the alpine view. 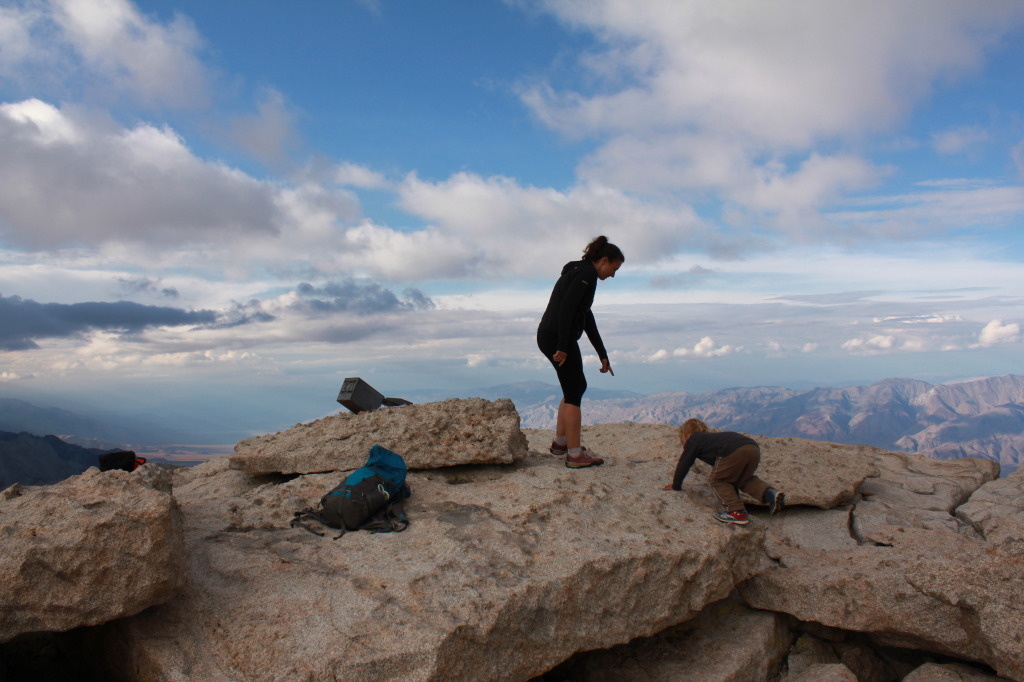 Melissa and Sawyer on the summit

Sawyer ate a little food and sipped his Mike’s Mix Sports Drink and after a few minutes he perked up. I knew by this time we were near the summit, and I was disappointed that we weren’t going to make it, especially after coming all this way. Then an extraordinary event happened, a moment that will probably stay with me forever. Without being cajoled, Sawyer looked up at me with determination in his eyes that I had yet to witness in his short life and he said, “I can do this”.  Now a responsible parent might not have even attempted this with a four year old and I was faced with an odd dilemma.  Should I allow a clearly exhausted child to keep climbing or do I hold him back? I contemplated the decision for a bit and came to the conclusion that Sawyer’s opportunity for greatness on this day was only a few hundred feet away, and today and for the rest of his life I want to support him in pursuing his greatness. We pushed on! 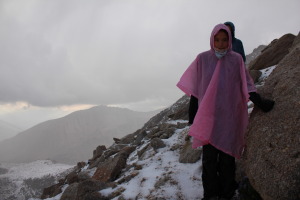 Audrey, not enjoying the decent

Sawyer found new vigor after the short rest and we efficiently and uneventfully made our way up the remaining climb.  We reached the summit just behind Melissa and Audrey and were greeted by a spectacular view that seemed to go on forever of the surrounding mountains. The sun was getting low in the sky and the lighting was beautiful yet slightly ominous.  I turned to look behind us and quickly noticed an extremely dark patch of sky accompanied by flashes of lightening headed our way. After taking only enough time to snap a few pictures and sign the summit register we were moving as fast as possible away from Langley’s peak.  Not twenty minutes after we saw the first signs of the storm, the graupel began to fall. Graupel is a form of precipitation somewhere between snow and hail unique to alpine conditions. Within minutes there was an inch of slippery precipitation on the ground and the footing got scary. However, we could make out the elevation change at the base of the talus field that marked the transition from graupel to rain and wanted to get there quickly.  In a combination of running and painful sliding, we got to the transition, the footing improved and the storm dissipated as the sun was setting. Above us there was at least three inches of graupel and the lightening was in full force at the peak.  With use of our head lamps, we arrived completely exhausted to our tents late that night. Melissa and Audrey hit the tent and instantly passed out while I had to yell at Sawyer twice to quit bouncing around and to go to sleep! 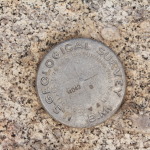 The next day we took a leisurely hike back to the lot and returned our bear canister to the ranger station (a bear canister is a small indestructible plastic barrel necessary for food storage in wilderness areas). At the ranger station, Sawyer got a standing ovation for his ascent and they informed us that he very might well be the first four year old to summit Mount Langley.

One Response to A Family Summit of Mount Langley