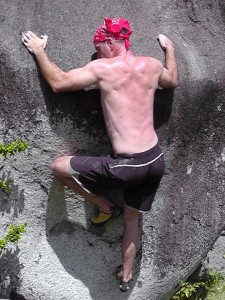 Having been a personal trainer for the past 13 years I have had the opportunity to guide, encourage, and support hundreds of clients with goals involving weight loss and shaping.  I have seen great successes and triumphs, but I have also witnessed frustration and failure. Although it is always painful to see clients fall short of success, when viewed with the proper mindset, failure can lead to wisdom.  Over time I have come to perceive very specific behaviors, traits and patterns that are unique to both my successful clients and my unsuccessful ones.  Much of my work now is spent encouraging, begging, forcing, and manipulating my clients to recognize and identify with behaviors that sabotage success, while developing behaviors that guarantee it. I have generated a list of mistakes that are common to nearly all individuals who are unsuccessful with weight loss.

On numerous occasions I have received emails asking whether Mike’s Mix, with its high caloric content, is the correct choice for someone who is trying to lose weight. Many dieters focus on drastic calorie reduction and food avoidance to lose weight.  These behaviors are the number one reason dieters fail to achieve permanent weight loss. I have never seen anyone develop an aesthetically pleasing body who is chronically calorie deprived.  However, I have seen hundreds of determined, strong-willed people work their butts off year in and out, constantly hungry and food deprived, to watch their weight roller-coaster and plateau.  They become ill, frustrated, and depressed and almost always end up more fat than when they began dieting.  Unfortunately, the majority of dieters fit into this group and often come to the erroneous conclusion that exercise and diet just don’t work.

Picture your acquaintances that possess the leanest and hardest bodies.  Are these people starving themselves or do they appear to be constantly eating?  I would venture that they are mindful of how they eat but are focused on eating frequently, avoiding empty calories and consuming foods that will aid their body’s recovery.  Back when Michael Phelps won the gold I read an online article about his daily eating regime.  It was ridiculous how much food he ate.  If memory serves right, a day of eating consisted of: 8 egg sandwiches and 10 pancakes for breakfast, 2 pounds of spaghetti for lunch, and several other meals throughout the day.  Now Michael Phelps burns more calories than your average Joe or Jane but the concept applies to anyone who wants a hard athletic body: You must eat to refuel and rebuild!  Eating a lot of food doesn’t always equate with becoming fat.

The most aesthetically pleasing bodies are those with firm, shapely muscles and minimal body fat.  I’m describing the athletic physique that we are all familiar with.  To build a body like this you must engage in athletic behavior (exercise) and provide nourishment that will accomplish two objectives: 1) Fuel and refuel the body’s energy supplies to make the most out of time spent exercising; 2) Build quality lean tissue.

You need to eat to fuel your body.  Glycogen is the carbohydrate that your body predominately uses for athletic activity.  You synthesize glycogen from carbohydrate in your diet and store it in muscles and liver.  If you are working out you are constantly depleting your glycogen and must replenish it by eating frequent meals throughout the day.  A recovery drink like Mike’s Mix is the best way to begin resynthesis of glycogen.  Now I know that at least a couple of readers are thinking their bodies have plenty of fat to fuel activity.  Although we all have enough stored fat calories to fuel numerous consecutive marathons, our bodies are not capable of using fat as a major energy source during exercise.  Body fat is converted slowly into usable energy and only during very long-endurance events does fat become a significant source of fuel.  Although you will burn some of that stubborn fat with exercise most of the energy is derived from glycogen.  If I haven’t convinced you of the importance of glycogen yet, consider that your glycogen level before you start exercise is the best predictor of your performance.  Without glycogen you will not have a productive workout.  Low glycogen levels are also strongly associated with over training and depression, characteristics not associated with effective workouts.  To have an athletic body you need to exercise and progressively become stronger and faster.  To accomplish this it is absolutely imperative to eat and maintain glycogen to prepare for your workouts.

You are what you eat!  Think about this concept for a moment, we are literally constructed from what we put into our mouths.  Without consistently eating foods that are rich in quality protein, vitamins and minerals, no one stands a chance of building a functional let alone aesthetically pleasing body.  The addition of muscle mass is a huge component to possessing an attractive body that most dieters fail to consider.  In fact, building and maintaining lean tissue is critical to losing body fat.  This happens for two reasons.

1:  Muscle mass is expensive tissue to maintain.  Although there is some controversy as to how many calories it costs to maintain muscle mass at rest (I have seen a range of 6 to 100 calories a pound per day in the literature), an increase in muscle mass will increase your resting metabolism.  So even when inactive or sleeping the more muscle you possess the more calories you burn.1 2:  The metabolic cost of exercise increases significantly with increased muscle mass as well as the cost of recuperating from this exercise.  In other words, adding muscle will require you to burn substantially more calories during exercise and when recovering from exercise. 2

If you are not supplying your body with the necessary building blocks (proteins, vitamins and minerals) that it needs to maintain, repair, and build muscle tissue you will end up losing it. Your body has no choice but to catabolize its own stores of protein (muscle) when insufficient amounts are provided in the diet. This is part of the reason why extreme, restrictive dieting can reduce metabolism and why yo-yo dieting is so dangerous.  Each diet cycle you become less and less muscular and more and more fat! 3

The law of thermodynamics is what encourages us to cut calories.  If you burn more calories than what you take in you will lose weight, an undeniable fact. However, the human body is a very intelligent and complicated machine that quickly makes metabolic adjustments when calorie consumption is reduced. When we significantly lower the amount of calories we take in, our body compensates by using less energy (metabolism slows) to preserve its components and energy stores.  At one time, starvation was a constant threat to humans and consequently we have evolved numerous defense mechanisms to cope with this life-threatening situation.  The body perceives a drastic cut in calories, such as a very low calorie diet, as a time of food shortage and responds by significantly reducing metabolic rate.  When food is scarce it makes sense to conserve energy to increase chance of survival.  Additionally, the body safe guards its stored energy supplies by reducing its reliance on body fat.  So, restrictive dieting actually encourages fat conservation instead of the desired reduction.4

What happens when the diet ends?

When food becomes more abundant (a low-calorie dieter resumes their normal eating) our bodies efficiently replenish lost body fat (energy stores).  Quite often, additional fat accumulates to safe guard against the next food shortage.  If you still aren’t convinced that very low-calorie diets aren’t your answer to weight loss, consider that metabolism remains depressed even in individuals who regain all their weight back after dieting.5
A very low-calorie diet is going to leave you in worse shape and fatter than when you started.  Don’t do it! (Please see extensive works cited at end of post).

In conclusion, very low calorie dieting will facilitate acute weight loss but the negative consequences far outweigh the benefits.  Almost all commercial weight-loss plans encourage low to very low caloric consumption and should be avoided like the plague.  These diets are amazingly popular and addicting, likely due to the quick onset of weight loss associated with the first week to month of significant calorie reduction.  However, long term, these diets are doomed for failure.  As you may have noticed, almost every American has tried one or many of these diets, yet our country is not suffering from an epidemic of leaness.  How many people do you know have lost weight dieting just to put it back on again?  There are very few, extremely disciplined, iron-willed individuals that are able to keep weight off with a constant low calorie diet.  But have you ever seen them in a bathing suit?  When an overweight person chronically under eats they are left with a high percentage of body fat (but not overweight) and nearly muscle-less physique.  In my opinion, success is not defined as constantly being hungry, moody and tired with a fat/skinny body.

Now that I have depressed everyone I will do a little to pick you up.  Everyone can lose weight permanently.  There are no exceptions!  I have witnessed and helped guide people in their transformation from obese to ripped lean.  I serve as an example myself.  I once weighed 240 and carried at least 22% body fat on my 5’10” frame.  Eleven years later, I weigh 168 and you can see every one of my abs (I did have the advantage of never giving into a low calorie diet).  How did I and others do it?  Although everyone travels their own path, the secret in a sentence is: We Became Athletes, which included eating like athletes.

I have included a long list of research papers on the effects of dieting on metabolism if you are interested in learning more.