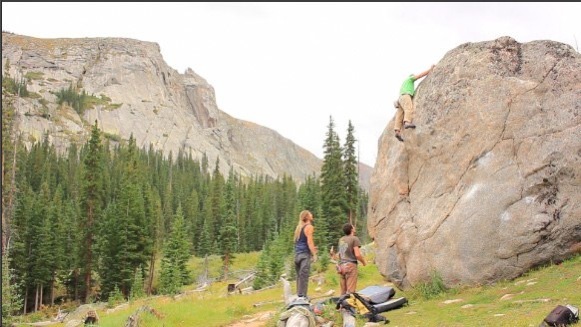 Bouldering is a newer discipline of rock climbing in which one does very difficult and often gymnastic movement up short climbs (boulders). Ropes are not utilized for this style of rock climbing, instead crash pads are used to protect ground falls, which are frequent. In bouldering, one seeks out the most difficult and aesthetic climbs and works out a sometimes complicated sequence of movement to ascend a boulder. This can take minutes or years depending on the strength of the climber and the difficulty of the route. You can think of this process as solving an athletic puzzle. I have fallen in love with bouldering as it constantly challenges me, both physically and mentally. No other form of exercise compares to the full body workout I achieve while climbing at my limit or the focus and clarity of mind that is needed to pull these moves, often high off the ground. This summer I had the opportunity to climb in Wisconsin and Colorado with Ian Cotter-Brown. Ian is also known as the Rock Warrior and beyond being one of the strongest and boldest climbers I have met, he has developed a passion for capturing the beauty and power of the sport of bouldering on video.

The Rock Warrior lives a rather unconventional life. In any given year he travels to multiple destinations in the US and around the world seeking out beautiful climbing lines and following the good temperatures (ideal friction for difficult climbing occurs between 40 and 60 degrees). His home is often a tent or the back of his Honda Element. He has excelled as an athlete since early childhood with a foundation in gymnastics and snowboarding. Several years ago, a snowboarding accident left him with a badly damaged knee and the doctors assured him if he ever walked again it would be with a bad limp. It is hard to imagine how this affected a young man whose identity and future revolved around the sports he had worked so hard to master. However, as soon as he was able to walk, Ian hit the rock and the completely unexpected happened; Ian’s knee made a complete recovery. Ian shared with me that this experience left him a different person. He was given a second chance to follow his calling and he wasn’t going to ignore it or take the opportunity for granted.

Without hopes of fame or riches, Ian follows his passion; the development of the obscure sport of bouldering by establishing new climbs and artistic documentation of his efforts. I am inspired by Ian and his courage to follow his calling, even if it means living a hobo existence. What would the world be like if we all followed our hearts and were able to let go of our fears and the shackles of social conformity? How awesome would it be, to all live lives of adventure, compassion and self fulfillment and leave our unique imprint on the world?

Ian’s newest short film, “Escape from the Midwest” features numerous climbs on the beautiful purple quartzite boulders of Devil’s Lake, Wisconsin and his initial migration west into Colorado. “Escape from the Midwest” is also the closest yours truly will ever come to being a movie star, as I am featured in several of the easier climbs in this film. If you have an interest in bouldering, check out the trailer. If you decide to download it, know that you are supporting one hell of a nice guy who has the guts to follow the road less traveled. 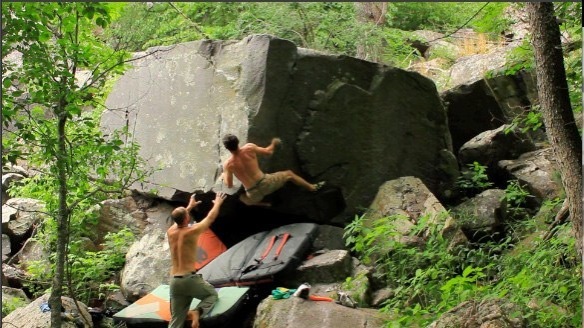